Like almost every programmer I have a large collection of programs that I started but never completed for various reasons, or which were written purely as experiments and never intended to be complete. Most of these are not worth recording, but this section of the site is for those few which are interesting enough for me to put them on display.

Way back when, sometime in the 1980s, there was a ground-breaking game called Elite, a space-sim in 3D where you flew around a universe trading, and fighting pirates. It was, and still is, a legendary game.

If you do a search on the internet you will find that every man and his dog is trying to create an "Elite for the 21st century" (including David Braben, creator of the original game).

"Galaxy" was my own attempt. I actually got quite a way into it, creating a galaxy of randomly-generated solar-systems, and allowing the player to fly around each system and jump to other systems via a galaxy map. However, it was written in a system called Blitz3D which, although it was very good, in the end was too unwieldy for me to take the game much further.

I put it on the shelf, with the vague notion of returning to the idea in some other, more flexible system. I've had occasional attempts at this since, but none have so far got as far as my original "Galaxy" did.

So, for better or worse, here is that original game for download

[ *sigh* Actually, the game doesn't currently work, probably because hardware has moved on since it was written. If I can get it working again, I will post an updated version. ]

If you just want to see the pretty pictures, I have some screenshots further below.

A few notes about playing Galaxy

You can skip the opening scene by pressing the Escape key.

On the ship-selection scene (which immediately follows the opening titles) I'd suggest you 'purchase' the first ship that is displayed.

When you are launched into space, you will be stationary at first. Press F1, and you will be shown the keys for controlling your ship. If you are on a laptop without a numeric keyboard you will find them somewhat awkward -- my apologies!

Once you have flown around the solar system a bit, click the 'Galaxy' button at the top of the screen to go to the Galaxy map. You have a selection rectangle which you can move around the screen. A red rectangle on the map shows the section which holds your current location -- move your cursor rectangle over this one, and click to call up the Local Map. The stars in white are those you can reach in one jump. The stars in red are too far away, and you will have to get to them by jumping to closer stars first.

To select a destination, click on the star you want. Click exit to return to the main view. You should now see the name of your selected destination amongst the buttons at the top of the screen. Click this to jump there. I suggest you stop your ship moving before you do this.

That's basically it. You might notice that the planets have a small "i" button next to their name (assuming that haven't turned the names off), and if you click this, an empty window appears. This was the beginnings of the 'Trade' system, but I never got any further. 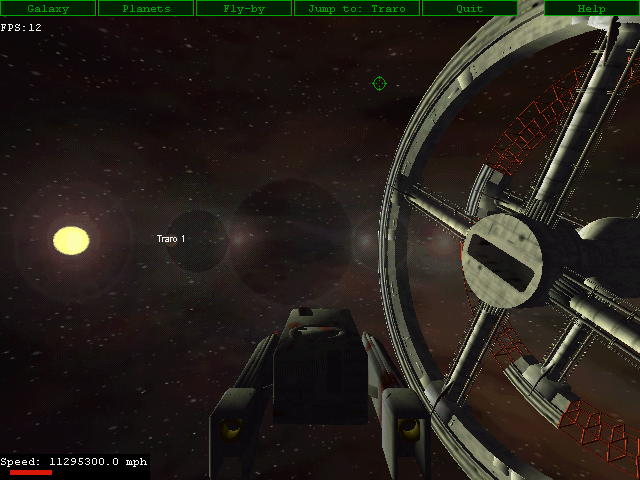 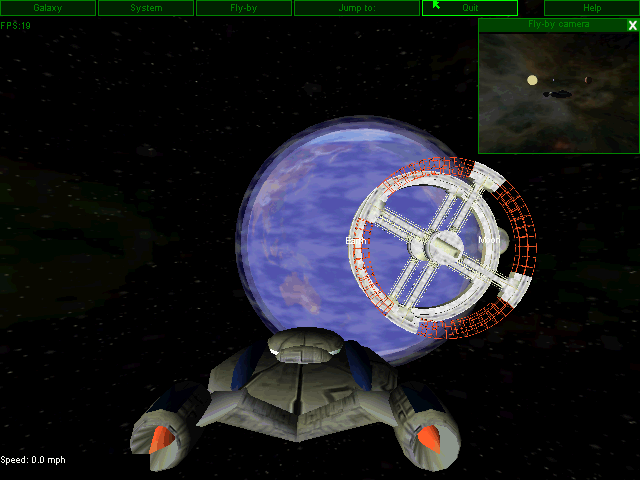 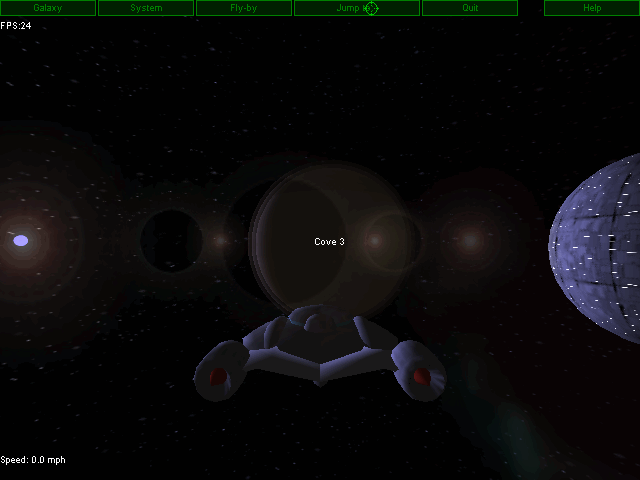